Sharing US Currency with Indian Students 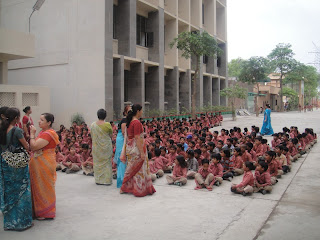 The other day at the charitable school, I was answering many questions the children had about my home in the US, to which they all paid close attention, listening in amazement. Several of the children were very interested in US currency, and they asked me "What is money like over there? Can you bring some American money for us to see?" Thankfully, I held onto a bunch of my singles and some change I had at the airport, and I brought in one of each coin, along with a single, a five, ten, and twenty dollar bill for them to observe. At the end of class today, the children made sure I didn't forget to show them the currency, as they asked, "You did bring the money, right?" I pulled out the money from my pockets, from which they all derived great pleasure! They each were touching the dollars, asking who was on each different coin and bill, which buildings were depicted on each bill, how many rupees each coin or bill was worth, and much more. After they all relished this special moment they never had envisioned would occur, one of the students took out some Indian Rupees and was showing me what Indian currency looks like! The other students were explaining to him that I probably already know what Indian money here looks like; but even still, he kept showing me more coins and different bills! It was very sweet that he wanted to share with me the same excitement he experienced from looking at foreign money! In a few days, it will be the last day of the school before summer holidays, until July 1st, so I am looking forward to this last exciting week of classes until then!
Posted by Justin at 12:05 AM No comments:

Poverty-Stricken Man on the Roadside in India 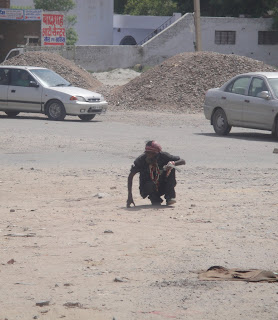 Witnessing this sight is one example of what initially inspired Ek Koshish to establish itself as an NGO and bring relief directly to the needy. On a very hot day, around 45˚C (113˚F), under the scorching sun in the middle of the day, this disheveled individual battles the merciless hardships of life each and every day here in Faridabad. Of course, he is but one of the hundreds of millions of other individuals in India living like him. How can we reach out to such people? What can we do to improve their lives? Where do we even start? Undoubtedly, we all ask ourselves these questions each day, but few of us ever actually make steps in the right direction to lend a hand to anyone truly needed. Yes, we all want to help, and we are willing to help; but, how do we even set the gears in motion? This motivation to provide for the deprived is why we started Ek Koshish, which has been reaching out to such people for the past two decades. We tackle these human rights' travesties to eliminate the elements of a vicious cycle, one that dooms more people to lead a life as this man currently leads his. We urge you to contact us if you too are willing to help improve India for all of its inhabitants!
Posted by Ek Koshish at 1:21 PM No comments:

Email ThisBlogThis!Share to TwitterShare to FacebookShare to Pinterest
Labels: Ek Koshish, Example of Poverty in India This morning, I went with the administrators of Ek Koshish to a small town in the village of Khedi, in Faridabad, where they support a self-sustainable orphanage. The orphanage has been running for over a decade, but since then they have been making a means for themselves by hiring women in the neighborhood to sew, stitch, and make all different arts and crafts made from 100% recycled materials: Once they sell their products, they can pay the women who fashioned these handbags, purses, wallets, and more, and also sustain the orphanage itself. They grow their own fruits and vegetables on the premises, and it is very safe inside for the 53 children living in the home. When I saw their goods for sale, I decided to purchase some of them, as they were very attractive, and I loved the idea of this self-sustaining orphanage. Finally, before reaching the orphanage, the directors of Ek Koshish and I thought it would be a good idea to bring some "Laddoos" (a famous Indian confection, a little smaller than an egg) for the children, which they all savored with joy. It was a real treat to see them smiling and enjoying our small treat for them. Here is an example of their unique approach to recycling goods, as we comfortably took a seat on these old tires, while we peacefully sipped chai with the orphanage coordinators. It was a very enjoyable day!
Posted by Justin at 9:24 PM No comments:

Infirmary at the Charitable School 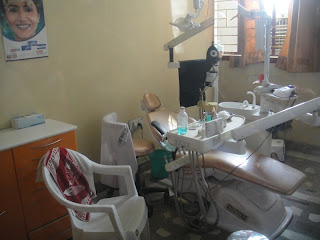 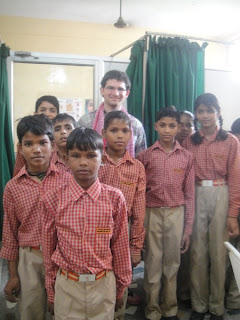 Today at the infirmary at the charitable school in Faridabad, all of the teachers insisted that I too check my hemoglobin, as all of the students and teachers in the school had done earlier today and yesterday. Of course, everyone was very nice, and I did not feel pressured to get the blood test done, but after viewing the equipment and assuring myself that everything was completely sterile, I figured, "Why not?" In the end, I had a hemoglobin unit of 13.3, which they affirmed was in the normal range. Every so often, the charity running the school subsidizes a doctor, his associate, and a lab technician come to the school with some equipment, and they check the health of all of the students. There is also a dentistry station next door in the building, but the dentist will be coming another day to give the children checkups and cleanings. Otherwise, today, after my lesson, a teacher approached me and thanked me for al of my help. She has seen a big improvement in the children's work ethic, especially in their interest in learning the material. Not a day passes when I feel like my work at the school has been ineffective, as all of the children beam with joy while they greet me hello or goodbye, when earlier these children rarely smiled.
Posted by Justin at 8:02 PM No comments: 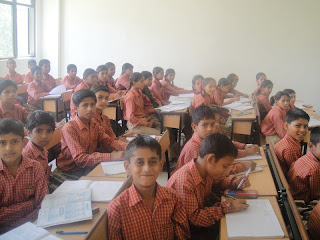 At the charitable school in Tigaon, Faridabad, the teachers have been very impressed with our volunteer's consistent work and contemporary methods for teaching the children English. In India, and especially in this school, most of the teaching encourages only students who can learn from rote memorization. Though rote memorization is extremely helpful, Ek Koshish feels that we can complement such methods with teaching for understanding the material as well, once enough material has been memorized. For example, our volunteer explained to us that he had asked the children to properly arrange the words in the sentence "There everywhere water is." When the first student responded, he started answering the question by saying "Water everywhere," when a teacher stopped him and said it was incorrect. The English teacher who assists our volunteer in all of the classes later explained to the other teacher, "Let the student make the mistake and think through the sentence. Then, Justin ji [our volunteer] explains what is wrong with their sentence, and lets them try again so that they can reach the correct answer on their own. This is how Justin ji teaches, so that the children can understand how to fix their own mistakes. It's been very helpful." The other teacher then observed him explaining to the child how to fix the sentence, and when he could make the sentence "There is water everywhere" she was very impressed! Let's see if he can keep dazzling the teachers with his performance!
Posted by Ek Koshish at 10:30 PM No comments: 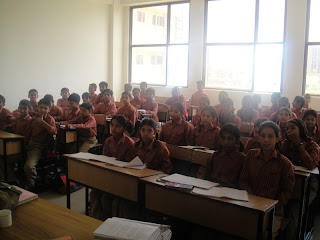 This past week of work at the charitable school has been one of the most wonderful experiences I have had here in India. I have lived and traveled here for over a year and a half now, but helping the students at this school is surely one of the highlights of my time in India! The children are all eager to learn about me and why I want to help them, which I feel inspires them to learn more about other cultures and want to make a name for themselves too. I have been teaching the English periods for 4th, 5th, 6th, 7th, and 8th grades individually, making rounds at each of these five classrooms. Before leaving the classroom, yesterday one of the students remarked to me that I am a very good teacher, and he really thinks English is fun now! Although there is a bit troublesome language barrier between the children and me, the English teacher accompanies me in all of the classrooms and let's me teach, while translating anything I don't understand. Mostly we began with some simple vocabulary, but eventually I transitioned each of the classes towards learning more complex grammar, practicing antonyms/synonyms, and translating Hindi to English sentences. I aspire to be a good role model for these remarkable children!
Posted by Justin at 12:52 AM No comments:

Our Volunteer at a Charitable School in Delhi NCR 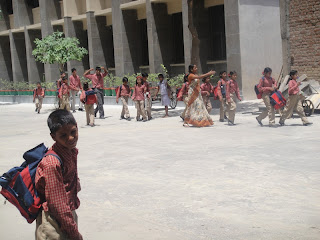 Today our volunteer went to a charitable school in Tigaon of Faridabad, where he has been working since the beginning of the week. Around 900 students attend the school six days a week, where they are taught, given clothes, given two meals daily, and have a safe place for fun and recreation as well. The school has been running for the past seven years, and the oldest class is in 8th grade. In the coming year, the same class will be in 9th grade, while the school enrolls even more students for kindergarten. Even the younger children take science and history classes, with classrooms and facilities which are extremely impressive, with a sports area, computer lab, and library, just to name of few features. The most valuable asset of the school, however, is the beaming children who come eager to learn each and every day.
Posted by Ek Koshish at 9:36 PM No comments: 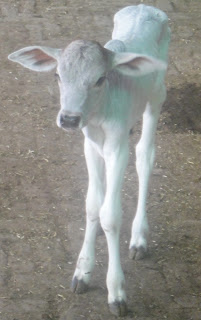 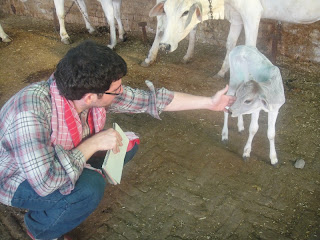 Today I visited a cow shed, or "Gaunshala" in Mawai, a village in Faridabad, Delhi NCR. It was very special to witness the reverence and care with which the laborers carry out their work. The operation was well organized, as the cow shed houses hundreds of bulls and cows, producing over 100 liters of milk per day, which tantalized my taste buds as I had never relished such fresh, delectable milk. The cows themselves struck me as very peaceful and humble creatures, with a distinct air of sympathy as they gazed into my eyes. As I pampered one of the many adorable baby cows, she neared me and relished the attention. Otherwise, the laborers were happy to see that an outsider was interested in their work, and expressed interest in showing me the ropes whenever I would like to stop by the area. I plan to make another visit soon to get my feet wet and learn more about these tranquil bovines. Don't forget to watch one of the workers as he milked one of these precious cows!

Welcome to our NGO! 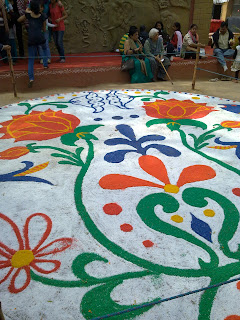 Namaste, and welcome to Ek Koshish's blog! We are very excited to launch our NGO, "Ek Koshish" (Hindi for "One Attempt"). We will be posting updates about our current activities as regularly as possible, and we invite anyone, who can lend us their time, to publish on our blog as well. We are still finalizing our website, but we will be sure to announce information about the site once it is available. We hope our work will inspire you to make time and reach out to your own community to create a happier, more unified tomorrow for us all.
Posted by Ek Koshish at 4:32 PM No comments: