Indian Tradition: ‘Ahoi Ashtami’- One Day Fast by Mothers for Well-being and Long Life of Their Sons 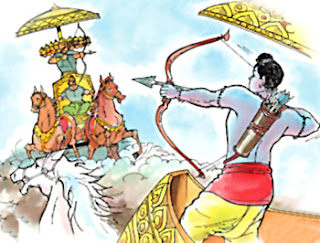 India Celebrates Dussehra Festival : Victory of Good over Evil
Dussehra is one of the most popular and one of the most celebrated festivals of India which is celebrated with great fanfare, joy and enthusiasm. In India as per local calendar it is also called Vijaydashami being falling on the 10th day of Ashwin month (in English Calender this month falls in September-October every year). This festival is celebrated in memory of victory of good over evil and also victory of truth over untruth.
Before Dusserah Indians celebrate Navratra which literally means Nine Sacred Nights and during these Nine Sacred Days/Nights all Hindus worship Goddess Ma Durga and hence these nights are known as Navratras.
According to Hindu mythology, Lord Rama, the eighth of the twenty four incarnations of Lord Vishnu killed Ravana or Dashanan (a demon having ten heads), the king of Lanka (now known as Shri Lanka) on the Tenth Day of their battle in Satya Yug (the age/period four five thousand years ago, in which Lord Rama reigned over people and everybody was properly looked after and taken care. We have the concept of a welfare state from Lord Rama’s period) and rescued his wife, Goddess Sita from the clutches of Ravana. Hence that day of victory is known as Vijayadashami or the Victory on the Tenth Day.
This day is also celebrated and is important for another mythological incident. It is also believed that on this day the exile and banishment of the Pandavas came to an end which connects this day with another age of Mahabharata where Lord Krishna, the 10th incarnation of God came on the earth. The Pandavas defeated the Kauravas (hundred sons of King Dhritrashtra who symbolise evil and grabbed the kingdom of the Pandavas after defeating them in gambling with cheating). As such Hindus worship their weapons etc on this day to mark the greatness of the day which symbolises victory of Good over Evil.
This day is also auspicious as it commemorates the legend in relation to Goddess Durga, known by various names in entire India like Ma Chamunda, Ma Kali, Ma Vaishnau, Ma Sheronwali etc. The legend is this that Goddess Durga killed the  deadly demon Mahishasura on this tenth day after a continuous fight of nine days. Hence this day of Dussehra is marked as the day of victory good over demonic powers.
It is an auspicious occasion for men, women and children to commence their ventures, education, learning in classical dance and music and to pay their respect to their elder ones.
In southern part of India, during these nine days before Dussehsra,  first three days are dedicated to the worship of Lakshmi, the Goddess of Wealth and Prosperity; the next three days to Saraswati, Goddess of Learning and Arts and the last three days to Shakti, Goddess of Power and Might and the tenth day is marked as symbol of victory over evil.
In India, Dussehra of Kullu (in the state of Himachal Pradesh) is well famous where not only thousands of people take part for nine days but also it is believed that Gods and Goddesses take part. People from all over the world gather there to be part of this celebration there. Similarly in South India, Dussehra of Mysore is celebrated in a grand style by the Royal Family of Mysore. Dussehra is so famous in Mysore that it is known as the State Festival of Mysore in Karnataka. During the festivity of Dussehra, the entire atmosphere is colourful. People gather in the open play grounds to enjoy a lots of live performance of folk and traditional artists, to watch spectacular short acts on the lives of Lord Rama and Ma Durga and others. There is also a stunning display of fireworks all around in the evening before the effigies of Ravana, Meghnath (Ravna’s son) and Kumbhakaran (Ravan’s Brother) are burnt amidst a great crowed of people.
If anyone gets a chance to be in India during Dussehra festival  don't miss this fascinating festival and try to understand the hidden meaning behind this festival which marks brotherhood, peace, prosperity for all.
Let's have a vow to do good forever...............
Wishing you all a very very happy and prosperous Dussehra !
Ek Koshish one attempt
Posted by Ek Koshish at 8:57 PM No comments: