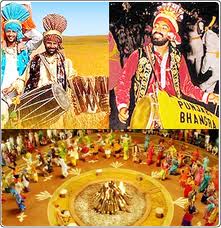 It is one of the most important festival of Northern India which is celebrated with utmost fanfare in traditional style. This festival is always celebrated on 13th January. Lohri  marks the end of winter season and it is the day when the sun changes its course also which is also called ‘Makar Samkranti’ which too is celebrated throughout India which marks the start of auspicious days. Makar Samkranti marks the transition of sun from Saggitarius to Capricorn during winter in the northern hemisphere which is called ‘Uttrayan’ (Sun starts moving towards northern side).  In Northern India It is called ‘Makar Samkranti and celebrated on 14th January.  In other parts of India, it is celebrated with different names like Pongal in South India, Bihu in North East India etc.  People who are inclined towards old traditions and religion, take a dip in the morning in the holy water of sacred rivers or ponds etc and worship the Sun to give them peace and prosperity. People also give charities to the poor and needy ones in the form of food, clothes and also money etc. These traditions are still alive and in small town and cities of India which are not fully affected by modernism, one can find stalls distributing hot food, clothes and money to the poor and needy ones on the day of Makar Samkranti.  This tradition is continuing since the time immemorial and finds its mention in our ancient scriptures as well.
As regards Lohri, it is a festival of Punjab in India and it has its origin in Punjab and nobody knows as to how it started and how old it is. There are various stories popular behind this festival.
Some people believe that it is related to the famous tale of a person namely ‘Dulla Bhatti’. Dulla Bhatti was a highway robber in Punjab during the reign of Akbar who was the emperor of India at that time in 16th Century. Dulla Bhatti used to rob the rich only for specific purpose to help the poor and needy with the money he robbed from the rich. He also used to rescue the girls who were kidnapped and taken forcibly for sale in  the slave markets of other neighbouring countries. He also used to give money to the parents of the rescued girls for arranging their marriage. As such he was a superman for the people of Punjab during that time.  That is why the most famous song of  Lohri  which everyone in India is well acquainted and sings with great zeal has his name in almost every line of the song to express gratitude to Mr Dulla Bhatti, a bandit by profession but a noble soul.
When the festival of Lohri starts approaching in January, small groups of boys and girls knocks at the door of houses and start singing the famous song of Lohri i.e. "Chunri Munri ho, Tera Kaun Bichara ho, Dulla Bhatti wala ho.............”. People take it as auspicious if the groups of the little boys knocks their doors singing this song. In turn, people give them popcorn, peanuts, dry fruits, crystal sugar, sesame seeds (til), jaggry as well as coins. Though, in big cities, this tradition of boys knocking the doors on Lohri is getting reduced, but in small towns and cities of Punjab and Northern India, one can discern these things very easily for at least 15 days before the festival finally comes on 13th January.
Some people are of the belief that the festival of Lohri has  its an other link. It has derived its name Lohri from the word  ‘Loi’ who was wife of a famous poet cum saint, Kabir Das who also lived during the period of Akbar in 16th century. In local Punjabi dialect, Lohri is pronounced as Lohi. Some people associate this festival with an other ancient legend of Holika, and Lohri is believed to be the sister of Holika. Holika was burnt in the holy fire by Hirnakashyap who was against even the recital of God's name. Holika burnt in the holy fire but Lohri survived after that. And people celebrate this festival to remember her. As regards Holika, Hindus celebrate a separate festival for her holy sacrifice in the fire, called Holi which too is celebrated in the month of February or March every year. Holi is the festival of colors which is well known all over the world.
Celebration of Lohri is very simple but very attractive which tightens the relationship and emotional bonds between the people. Freinds, relatives and family members gather  in the open space in or outside home and light a bonfire at sunset. All sings together and move around the bonfire dancing, rejoing and chanting  Lohri songs. They also throw some peanuts, jiggery and sesame seeds (reoris) etc in the bonfire to worship it. In addition to this, they sit around this bonfire gossiping, cracking jokes, doing mimickery, singing songs, playing antakshri etc for hours making the atmoshpere more pleasant.This continues for 2-3 hours till 10-11 pm. Really It is fantastic to celebrate such festivals in India. Some people organise dinner etc on this occasion which adds to the celebration. In villages of Punjab, people celebrate this festival whole of the night.
May God bring peace, harmony and prosperity in the world ..... Let us do our Ek Koshish one attempt to make the world a single family through these festivals !
Ek Koshish one attempt
Posted by Ek Koshish at 11:41 AM No comments:

Girls are Pearls, Save Them !!!

In its attempt to spread awareness in the society about the dangers of sex imbalance in the society due to increasing female infoeticide which was called "Sanitised Barbarism" in the decade of 1970s, Ek Koshish has orgainsed a drawing competition on the topic in which students at Ek Koshish and friends of the team of Ek Koshish participated. This was awarded as the best drawing: 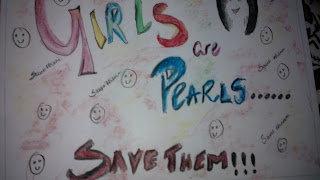 Let Us Join Hands do Ek Koshish One Attempt - in Making the Most Sacred Place (Womb of a Mother) Safe for Innocent Girls before Their Appearance in This Beautiful World !!!!!

Posted by Ek Koshish at 5:04 PM No comments: