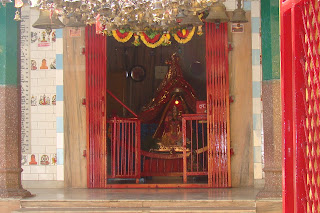 Festival of Navratras is celebrated in India for nine continuous nights which are considered and believed to the most sacred period when Goddess Durga (Almighty Goddess Mother) blesses each and every one who prays Her sincerely and honestly. In Indian religion, there are many legends attached to this spiritual festival of Navratra. All of them are related to Goddess Durga, Incarnation of Shakti (Hindu Almighty Mother Goddess) and Her nine forms which are prayed in one way of the other by Hindus. In India this festival is celebrated in different styles.
This festival falls twice. First time, it festival falls at the end of March or beginning of April every year. Second time it falls in September every year.
It is one of the most celebrated festivals of Hindus living in Northern India. It also holds special significance in  Gujrat and Bengal and one can see it in the zeal and fervor of the people with which they indulge in the festive activities to celebrate Navratra. Dandiya and Garba Rass (dancing by men and women with wooden sticks in their hands which they strike against each other while dancing and singing) are the highlights of the festival in Gujarat.
It marks the augmentation of new season, farmers sow seeds and thank the Goddess for Her blessings and pray for better yield.
Goddess Durga is worshipped in nine forms in Navratras. In the first three days of Navratras, Goddess Durga, Warrior Goddess mounted on a Lion, dressed in red clothes is worshiped in Her various incarnations in these three days  which are  known as Goddess Kumari, Goddess Parvati and Goddess Kali  which are worshipped during first three days. They represent the three different classes of womanhood that include the Child, the Young Girl and Mature woman. During next navaratras Hindus pray Goddess Durga in the form of Goddess Lakshmi, the Goddess of Wealth and Prosperity shown dressed in gold and mounted on an owl, and also as Goddess Saraswati, the Goddess Of Knowledge, shown dressed in milky white costumes mounted on a pure white swan with lute in Her hands.
Sweets and delicious deserts are prepared for the celebrations. Children and adults dress up in new bright-colored dresses for the night performances.

Many Hindus observe rigorous fasts during entire period of Navratras. The festival culminates on the day called as  Ram Navami. On this day, Hindus perfom Kanya Pujan with nine little girls (worshipping little girls symbolizes worshipping of nine forms of Goddess Durga). People with pure heart and soul invite these little nine girls to their homes, offer sacred place to sit, wash their feet with sacred water, put tika on their head (Hindu put red marks on their forehead which is called very auspicious and sacred) and then offer them good food, sweets, new clothes, other gifts and small money in the form of thank and seek their blessings while they depart from their homes.
May Goddess Durga bless the whole world with peace, prosperity and fraternity!
APPEAL TO THE WHOLE WORLD: SAVE GIRLS AS THEY ARE PEARLS..... AND THIS FESTIVAL MARKS THE IMPORTANCE OF GIRLS IN OUR SOCIETY SINCE TIME IMMEMORIAL.......
EK Koshish one attempt
Posted by Ek Koshish at 5:00 PM No comments: